Here is the short annual report of Roots and Wings Foundation from 2017.

Térerő Community Foundation for Our City (the community foundation of Miskolc) organised its firs great event on the 26 th of May. The first Donor Circle in Hungary that took place outside Budapest was outstandingly successful: local donors supported three local projects with HUF 2,5 million (€8,200).

Ferencváros Community Foundation has organised its 2nd Swimathon in June. Six local civic projects, including the community foundation itself, and our program campaigned and participated in the event; altogether the seven teams raised HUF 16,3 million (€53,500). Very few of us hoped for such a great sum.

Pécs Community Foundation published its first ever call for proposals; the The Strength of Neighbourhood Fund aims to encourage civil initiatives with HUF 1,5 million (€4,900).

At the beginning of September the Roots and Wing Foundation registered as a foreign funded organisation. According to the new Hungarian legislation, designed after the Putin-type law in Russia, every civic organisation that receives more than HUF 7,2 million (€23,600) support from abroad in a year has to do so. Thanks to the generous support of our foreign donors, our foundation that runs KözösALAPON (The Hungarian Community Foundation Support Programme) is on the list.

On the 10th of February we gathered to celebrate the achievements of the first phase of the Community Foundation Support Programme (KözösALAPON in Hungarian). Three newly registered community foundations, an ’old’ and ever growing one, Hungarian private donors, representatives of partner institutions, our volunteers and well-wishers came to join us.

“The community foundation addresses what other foundations don’t: creativity. It brings out creativity from the community … We were supporting worthy local causes for quite some time [before we established our community foundation]”, said Tamás Csepregi, founder of the Danube Bend Service Community Foundation, “but we wanted to do it with European quality, this is how we found KözösALAPON and we learnt a lot from each other in the last two years.”

“I believe in the community foundation concept; it is an extraordinary experience in itself that we can implement it in Miskolc” said Norbert Képes, chair of the board of Térerő Community Foundation for Our City (in Miskolc). “We do not have great dreams that suddenly everybody will change in our city, but last year we did manage to bring people together several times to work together for important causes despite the differences they may had. Our foundation would like to perform this role, as regularly as possible, in the future.”

Péter Peták, chair of the board of Pécs Community Foundation stressed that “… the establishment of the community foundation brought together different people who did not necessary knew each other in the city which has not such a nice atmosphere. This is what the foundation would like to change: build bridges between different societal groups and channel local people’s creative energy into building a better community.”

“We live in a world, where everything we consume is produced in remote factories. The state, well or not so well, does take care of us thus we are surrounded by issues in which we cannot really have a voice. In this context, it is extremely important and worthy of my support the idea that we also can contribute to and engage in issues at the community level and we can count on each other’s help. There is nothing that is more relevant than this, and perhaps not just in Hungary” said István Miszori, a businessman supporting the programme.

Tamás Scsaurszki stressed that everything KözösALAPON achieved in the last four years was the fruit a team effort. KözösALAPON sees itself as a big team from our volunteers to paid staff, representatives of foreign donors, businesses providing pro bono services and partner organisations united in a long-term effort to build local institutions that inspire and enable people to shape their communities. Through this joint effort KözösALAPON wants to demonstrate that Hungarians can cooperate and contribute to a country which is better, more liveable.

Then we read out the congratulating letter from the European Community Foundation Initiative and it was champagne and cake and a lot of informal conversations to finish with!

(Go to https://www.facebook.com/kozosalapon for pictures)

The core of IBS-KözösALAPON’s cooperation is about exchanging experience and bringing even greater internationalism to the field of community foundations in Europe.

Axel’s visit was the next leg of the cooperation we started with IBS in September 2016. In February we learnt that the European Community Foundation Initiative decided to support KözösALAPON’s team study trip to Germany in April. In turn we will visit community foundations in Halle, Berlin-Neukölln and Eberswalde, and meet with IBS and with foundations supporting the German community foundation movement. 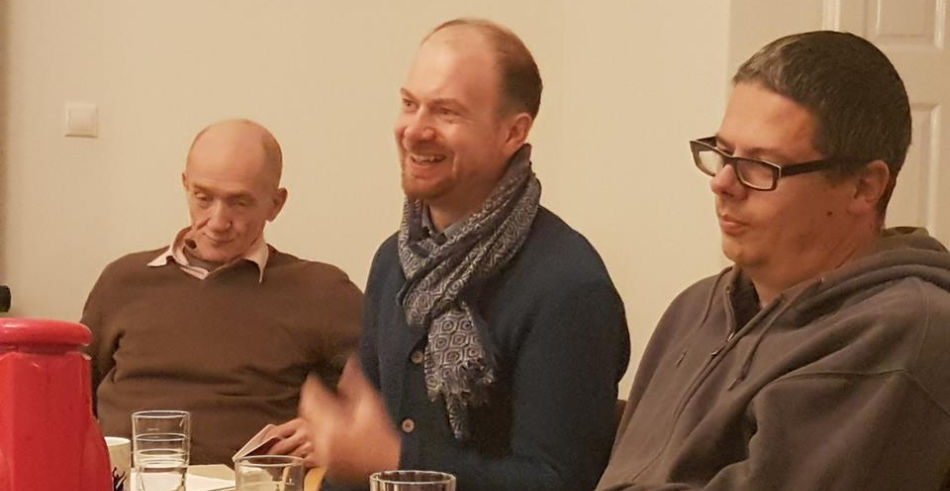 Axel Halling (in the middle)

We have reached a milestone in the life of our programme: two of our ambassadors have decided to support, beyond their skills and personal commitment, the Community Foundation Support Programme with a significant financial gift: István Miszori gave a gift of 1 million HUF, and Attila Turigave 500 000 HUF. Their inspiring act proves that it is indeed possible to find private funding for community foundation development on the national level as well. Thank You very much!

Tamas went on a week-long study trip to Germany organised by the European Community Foundation Initiative (ECFI); at the celebration of the 20st anniversary of founding of the first CF, the 300th CF received the official Seal of Approval from the German support program. In Germany CFs deal with both local and global challenges. For instance, they try to find solutions for the depopulation of smaller towns, and they take part in the integration of registered refugees. As a result of the study trip, we are planning a closer cooperation with the German support program (IBS). The task may not prove to be too difficult, as one of their staff members lived in Hungary for several years.

In the past 25 years community foundations in the Visegrad countries have brought radical changes in terms of how local communities operate and how they respond to different issues. A one and half year programme across the Visegrad countries introduced CFs and their work to a wider public - in Hungary this was coordinated by the Hungarian Community Foundation Support Programme. You can read about the best practices and the most important social changes achieved by CF's here; a video made at the project closing conference can be watched here.

April 2016 saw the end of our funding from the Norwegian Civic Fund, our first major grant. Three years into our work, we are delighted to report progress towards building a strong community foundation movement in Hungary.

April 2016 saw the end of our funding from the Norwegian Civic Fund, our first major grant. Although now grantees often complain about the number crounching that takes up such a big part of the reporting requirements, we cannot help but continue to celebrate what we see as our greatest achievement - the six organising groups who are working hard towards establishing community foundations in their communities.

Groups in the Danube bend, Miskolc and Pécs have already submitted the necessary papers to the courts as part of the formal registration process, and the other three groups in Debrecen, Gödöllő and Nyíregyháza will likely follow them in the next few months. Going beyond the numbers, these emerging community foundations are all very different, reflecting their communities and the leaders who are establishing them. At the same time, they all have a strong local focus, committed to relying primarily on local resources. Their hearts and souls lie within their active, voluntary and diverse boards.

In the course of 2013-2016, we also supported Ferencváros Community Foundation to continue its professional development and to become a financially more resilient organisation, at the same time as implementing ideas new to Hungary such as the first Donor Circle.

We know that the past three years is just the beginning. We are delighted to report that new donors, the C. S. Mott Foundation and the Miller Family Trust, have committed financial support to ensure that we can provide ongoing professional advice and funding to emerging and more mature community foundations during 2016-2018.

At this point, in addition to the emerging community foundations, our special thanks goes to the Norwegian Civic Fund and its implementing partners in Hungary for having such confidence in us: they were the first major donor of the Community Foundation Support Programme (KözösALAPON in Hungarian) and their flexible, long-term support contributed to the successful launch of our work.

We organised the 1st National Conference of Community Foundations in Hungary, which took place on 18th and 19th of March, 2016 in Budapest. The Conference aimed to give an interesting picture of the context and the current state of building community foundations in Hungary. It brought together members and supporters of the local organising groups with people interested in and supporting the concept of community foundations at the national level.